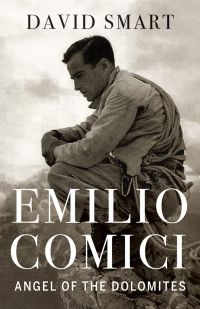 The first English-language biography of one of the most renowned Italian climbers, Emilio Comici, who bagged over 200 first ascents in the Eastern Alps prior to his death at 39 years of age in 1940.

Between 1925 and his death in 1940, Emilio Comici was the pre-eminent climber in the Eastern Alps, the hotbed of global rock climbing at that time. He made first ascents on some of the highest and most notorious walls in the Alps, including the northwest face of the Civetta, as well as dozens of other climbs.

Comici invented many modern big-wall techniques and the big-wall idiom itself that later took root in Yosemite Valley. Comici also made solo ascents of some of the hardest routes in the Alps, including his climb on the north face of the Cima Grande. He also designed the first artificial climbing wall that was ever actually built.

This book explores how family tragedy and growing up in working class Trieste under Austrian occupation shaped Comici’s complex personality and attitudes toward climbing. He was loyal to his friends, deeply concerned about the vulnerable, including his fellow climbers, and yet highly competitive, a born vagabond and yet also a dandy, irresistible to women, and yet unable to settle down, devoted to his mother and to the mountains, and finally, like many other Italian climbers of the period, a member of the Italian fascist party although he was profoundly anti-German and opposed to racial persecution.

David Smart has been climbing since 1975 throughout North America and Europe. He has completed hundreds of new routes in eastern Canada and is the founder of Gripped, Canada’s Climbing Magazine, Canadian Running magazine, Canadian Cycling Magazine and Triathlon Magazine Canada. He is also the author of five climbing guidebooks; a memoir entitled A Youth Wasted Climbing, short-listed by the Banff Mountain Film and Book Festival in 2015; Paul Preuss: Life and Death at the Birth of Free-Climbing, short-listed for awards by both the Banff Mountain Film and Book Festival and The Boardman Tasker Prize for Mountain Literature (UK); and he is the co-author with Brandon Pullan of Northern Stone: Canada’s Best Rock Climbs. He is the editorial director of Gripped Publishing and is still an active new-router in northern Ontario. He lives in Toronto, Ontario.