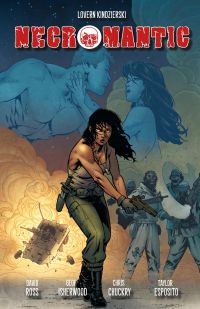 Necromantic is a love story disguised as a supernatural action thriller, proving that not even death is enough to stop true love.

Jesse Harris’ fiancé just got killed–a risk of the job when you work special forces for the United States government. But dead doesn’t always mean gone…especially when you’ve been seeing ghosts all your life.

With her fiancé dead and her life in pieces, Jesse finds herself wrapped up in a supernatural conspiracy far greater than anything she’s ever dealt with before. Because her fiancé is back, and he’s looking for her help to stop his soul from joining an army being gathered to take over hell.

Lovern Kindzierski is a successful writer, colorist and illustrator based in Winnipeg, Canada. He has been nominated as best colorist for the Eisner Awards, Harvey Awards, and Schuster Awards. As a writer, he has worked on titles including Spiderman, Wolverine, and The Victorian. His writing on Tarzan garnered him a Harvey Award Best Writer nomination.