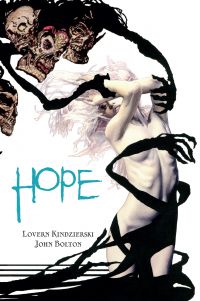 Shame is dead, her demon father blasted back to Hell. Hope, newly born into the body of a young woman, stumbles from the battle scarred castle still filled with Shame's malevolent servants. The evil witch may have been defeated, but her dark forces are determined to stamp out Hope's return to the world.

Lovern Kindzierski is a successful writer, colorist and illustrator based in Winnipeg, Canada. He has been nominated as best colorist for the Eisner Awards, Harvey Awards, and Schuster Awards. As a writer, he has worked on titles including Spiderman, Wolverine, and The Victorian. His writing on Tarzan garnered him a Harvey Award Best Writer nomination.